My family and I have been planning our annual holiday since January. We have longed to cruise again since our last rapid-fire cruising experience with three cruises in six months in 2010 when Bean was a mere babe.

As a family of five we had contemplated the logistics of travel by a mode where cabins have a maximum capacity for four persons, and were thrilled when my mum (an avid cruiser) not only suggested she come along and book a separate cabin for herself and our five year old, but also to absorb a significant chunk of the cost. So with Nani on board (see what I did there?) we set about planning and looking forward to our weeklong holiday aboard the Pacific Dawn.

The time had almost arrived to embark on our journey when last Friday, on the eve of the trip and amidst quite violently windy weather (storm season is in full swing here in Queensland), we received a text message: 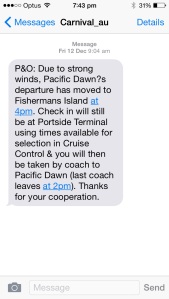 This was a very minor inconvenience in the scheme of things but in hindsight was an ominous forewarning of what lay ahead.

After a morning of travel we boarded the ship and settled in, dancing and enjoying the sail away party on the open deck.

By nightfall it became very obvious that the weather was indeed causing a turbulent journey. The open decks were closed off, and the ship’s captain announced that stabilisers were being deployed to help balance the boat. Gale-force-category winds were causing a 6-meter swell. Passengers were starting to get sick.

Our baby daughter Rosie was one of those affected by the rocky motion. In our cabin, with every dipping sway of the ship, drawers would fly out and projectile objects would fly across the room.

She began vomiting. It went on all night. All I could do was cover the carpet with towels, and keep her comfortable. She was unable to keep any food at all down, and was also sick after her breastfeeds and water sips.

In the morning, as I slept after a totally sleepless night, my husband dropped our sons into the kid’s club and looked after Rosie. She deteriorated even further, to a limp and poorly state, and my husband decided she needed to see the ship’s doctor.

When I awoke, it was 9 am and I searched the ship for them, finally locating them in the medical centre. Rosie was laying on a blood-stained hospital bed, listless and pale. She’d been on an IV drip but had stirred when a pager had gone off in the room and unplugged her drip.

She was monitored for several more hours and then released to the cabin.

During the evening, as baby slept, mum was minding her, we decided to get some dinner (our boys had eaten meals at the buffet during the day but we had both skipped meals to be with Rosie). As the main course was served we were approached by a waiter with a message to return to the cabin. Rosie was again in a bad way.

I phoned the medical centre around 9.30pm and was advised to come straight away. She was seen to by a very kind doctor and two lovely gentle nurses (one of whom had been called up from her lodging to assist). Rosie was so dehydrated that they couldn’t manage to insert the drip. She could hardly cry but was very upset. They tried several times to insert the drip; in her elbow, her wrist, her hand and foot. They asked me if they could shave off some of her hair and insert the drip into her head. I was terrified and reluctant.

Finally they did manage to get it into the top of her little foot.

They took several vials of blood from her wrists, testing for bacterial infection, and administered a broad spectrum antibiotic and fluid through the drip. They also needed to test her urine but because she was so dehydrated and wasn’t producing any wet nappies, this was done via a catheter. It was very unpleasant and painful for her and she finally collapsed into a very heavy sleep. I slept with her on the hospital bed.

We were discharged from the medical centre at 9am on Monday morning. The tests had shown up nothing. We went back to our cabin with some medical suppies; hydralite fluid, syringes, painkillers, gloves and bags. I must say, the doctors and nurses aboard the ship were so professional yet compassionate.

The ship docked in Noumea, New Caledonia, during that day. We had arranged to take ashore some presents sent by my brother’s partner for her family who live in Noumea. We met them briefly with Rosie and our little son, Bug.

At seven o’clock Rosie started being violently sick again. She was choking with every episode. After three more vomits in twenty minutes I returned with her to the medical centre. The doctor suggested that we disembark and seek urgent medical attention from a paediatrician at the CHT Magenta hospital in Noumea. I was told to return to the medical centre with a bag packed for two days’ stay, and our passports.

The senior doctor walked Rosie and I off the ship, just an hour before it was due to depart, into the darkness.

I was introduced to a Port Agent who was assigned to liaise with me. The doctor gave me repeated assurances that this Port Agent would make all necessary arrangements, and accompany me to the hospital. I believe he is contracted by the cruise company. He himself explained that it was his role to translate, book accommodation, transport and arrange medical care on our behalf.

Port Agent then walked me to a running private transport vehicle and introduced me to the driver, Patrick. Patrick was in his mid-forties and spoke perfect English with a French accent. Only after I had buckled Rosie and I into our seats and Patrick had loaded our luggage into the car and taken his seat, did the Port Agent poke his head through the window and say “I need to go back to my office. Patrick will take you to the hospital. I will be there later. Is that okay?”.

Um, yeah, sure leave me with the stranger I just met, in a country I don’t know, with no phone reception and a violently ill baby. That’s okay.

So we drove off into the darkness, winding, narrow, mountainous roads, in silence.