This is such a simple little investigation you can do with materials you already have in your home, and it has WOW factor! My boys loved watching the colours swirl and combine! 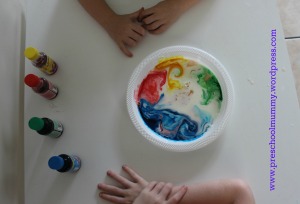 Investigate what happens when your child touches the cotton tip to different parts of the liquid, and notice how when the cotton tip is removed, the colours still swirl!

Try adding more soap to the dish, and watch as more swirling occurs, as a result of any remaining single molecules attempting to match up.