Whenever we start looking at a new idea of my son’s, I like to equip him with some vocabulary that is specific to that theme, which he’ll be able to build upon and use as we learn more together through play.

As we looked at his magnificent rainbow drawing, we chatted and I casually asked him to tell me the colours he’d drawn, whether he’d missed any, if they were in any order, how he’d chosen the colours.

In answering these questions he showed me that he knew all of the primary and secondary colours, he could identify that he was missing some, and that he had a preference for certain colours and had used his “favourites” rather than the known colours of the rainbow.

This is what we teachers call “assessing prior knowledge”. All children come into new learning environments (a classroom, a museum, a park, the dentist surgery) with prior knowledge, and it’s so important to acknowledge that and use it as a foundation for future learning.

Our conversation showed me there were gaps in his knowledge, and this is exciting, because it means we get to go about learning more together. He didn’t know that rainbows always have the same colours, in the same order, or that there were special names for dark blue and purple (which he called them), which are of course, indigo and violet.

We had a quick look on Google Images of rainbow pictures and I waited to see if he’d see a pattern. He did eventually notice that all the rainbows had the same colours and that there was no brown or black in the rainbow. Awesome!

Next up I got out the packet of Crayola Washable markers and we put them in the same order as we saw on the screen. I had a big piece of posterboard handy so I held his little hand and we traced the arcs onto the page together. Next I explained I was going to write the colour names down. We sounded them out together and talked about the initial sounds of each word (o-0 for orange, letter o, sound o, what else begins with o sound? Off, on). Finally we talked about those pesky colour names Indigo and Violet, and he used his prior knowledge once more to tell me that Violet’s a name too, a girl’s name, from a book (Letterland). 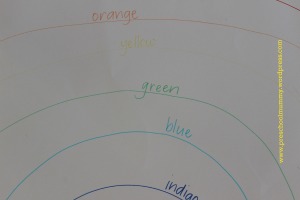 Then the song for his favourite program came on the TV and my little man jumped up, ran over and sat on the couch to watch, so I left the cardboard on the kitchen table and went to sit with him to try and get some awesome craft ideas from that silly chap we know and love, Mister Maker.

Shoe shopping in January! Love it or hate it, it’s about as unavoidable as parenting duties get. This year we chose @theathletesfootaustralia , because our kids are super active (hallllp!), run a lot, and are heavy on their footwear. I know I’m not alone, anyone else’s kids use their shoes as stoppers? So I wanted to make sure that their fast growing feet are healthy as they develop. Thrilled with their choices, and with the care and info we received in store, courtesy of Isabella and the #myfit3D fitting experience. I’ll pop some vids up in stories of the kids getting measured up. Who has braved the school shoe shop, and who is planning on using the long weekend? #asics #ascent #athletesfoot #myfit3D #sp #schoolkids #BTS2020 #fourkids #fourkidslater #schoolholidays
Kids had so much fun today at @atqpac self portrait workshop! The facilitators were amazing at instructing them, building their confidence and scaffolding their learning. Beautiful way to spend an afternoon, and now we have some lovely wall art to hang up! #haveago #selfportrait #visualartsforkids #schoolholidays #schoolkids #teacherkidlife
Latest @aldiaustralia haul! I’ve got three days off with the kids to finalise our #BTS arrangements. Zipped into Aldi today and grabbed some bits and pieces for my eight year old, who let me know *yesterday* that his school bag broke on the last day of term. Thanks, mate. Okay so here are the bargains on special buys: lead pencil 12pk: 99c, sports sock 3pk: $3.69, Star Wars pencil case: $3.99, ruler 49c, highlighter 4pk: $1.99, eraser 2pk 49c, colour crayons 12pk: $1.79, Smash gel lunch box ice packs $2.99 AND huge backpack with padded tablet/laptop compartment $19.99 Aldi FTW! #ALDIBackToSchool #Gifted #ALDIHaul #ALDIPartner @aldiaustralia
The #podsquad back together for season 2 in 2020! What a team: @mrdtimes3, my favourite teachmedian (it’s a hybrid profession!) and Jill, incredible co-founder of @teachstarter. Also pictured, Jeff (Mr D’s rad manager). Looking forward to another year with the team. Join us Sunday, Monday and Friday for teacher chat, laughs and ideas for your classroom. #education #teachers #teachstarter #fortheloveofteaching #podcast #nova #teachersofinstagram #aussieteachertribe #teachersfollowteachers #teacherlife
So fabulous. That time our rooftop promo photo sesh almost saw us BLOWN off the 30 storey roof, but we had Beyoncé hair vibes so we selfied. Back with @mrdtimes3 kicking off season 2 of For the Love of Teaching Friday Funnies! This week Mr D tells us what he really thinks- about Aussies!!! His take on the local lingo, the stars of @theprojecttv (looking at you @mrstommylittle ) and ALL the alcohol. 🍸🍸🍸🍸 link to pod in m’bio 👌🏻 #podcast #teachersofinstagram #teachersfollowteachers
We ❤️ rainy days! Gum boots, rain coats and jumping in muddy puddles on our afternoon walk. #Brisbanekids #childsplay #messierisbetter
%d bloggers like this:
%d bloggers like this: